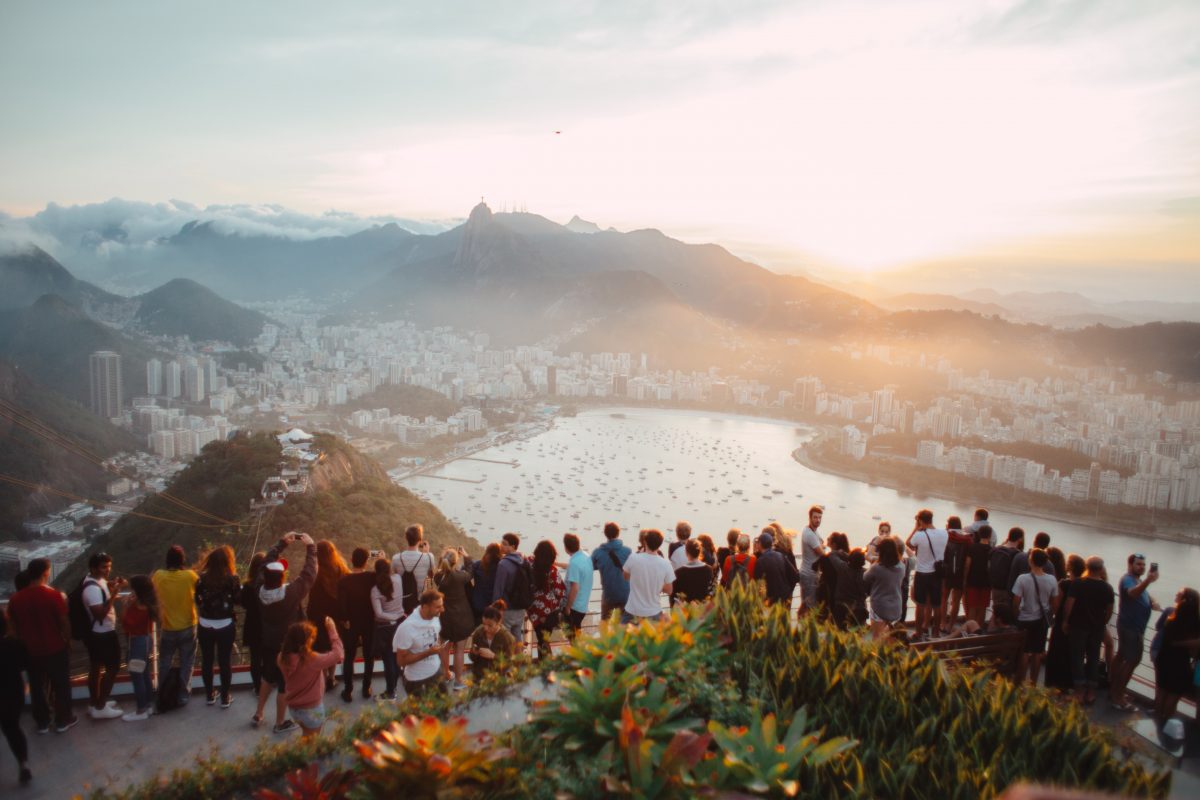 Have you visited a destination that has “lost its magic” due to the crowds there? Authenticity as well as the quality of life of residents has been in danger since overtourism started to eat capacities of the destinations. Overtourism is referred to as “loving places to death”². Three decades ago, Venice was home to over 120 000 people¹⁶. The number of residents is decreasing. A couple of years ago before the pandemic, there were about 55 000 residents left in the historical center of Venice¹⁶. This means that the population is about 54% less than it was before. This is because of overtourism.

Overtourism was a current issue before the COVID-19. However, the demand for tourism still exists and overtourism can be an issue once more⁷. Therefore, strategies should be created already to prevent it from happening again.

The examined question is conflicting, and that is exactly why it is interesting. Is it that digital advertising was the factor that caused overtourism? Maybe digital advertising could be the one that could prevent overtourism, but would it be against the principles of the original idea of advertising?  What is the Golden mean, where overtourism could be prevented but all the tourists would not be lost? So many questions. Let’s get into the question a bit more closely by opening it up.

Overtourism is googled in 2006 for the first time but is considered an older issue in another context². Overtourism is defined as the excessive increase in the number of tourists that causes overcrowding in locations, when locals face the negative effects of seasonal tourism peaks, forcing inhabitants to make permanent changes to their lives, access to amenities, and general well-being². Overtourism has a negative impact on the quality of life of residents, due to a rowdy and crowdy environment that loses its authenticity and amenity². There are strains on infrastructure, and inappropriate behaviour by tourists, but also decreased enjoyment of experiences by tourists². Residents who live in a tourism center and are vulnerable to the negative impacts are less supportive of tourism compared to those living away from the tourism center¹².

There is also social responsibility (SR) which is a multidimensional concept that is about respecting people, places, and things, recognizing the connection between others as well as the environment and appreciating it¹³. In the 1980s SR became part of advertising as a creative strategy¹³. According to Jerry Welsh (1985) social responsibility is a good marketing hook¹³.

Now, that we have investigated overtourism as a phenomenon, let’s move forward to advertising itself. Advertising is a crucial tool in our economy and society¹⁵. It is a marketing tactic and is any paid message that is delivered to consumers as meaning to make the offer more attractive to them¹⁵. Digital advertising, in turn, is advertising that involves computational networks¹¹. As considered earlier, would the opposite goal for advertising, decreasing the number of tourists, be against the principles of the original idea of advertising?  Advertising is also about giving information to customers¹³. Therefore, the original principles could be applied by giving information about the destination’s real situation, as actually, has been done already.

To advertise a destination, technology is needed – the smarter, the better. Destination smartness can be about “taking advantage of smart technology in creating, managing, and delivering intelligent touristic services/experiences”¹. Destination smartness may be conceptualized based on how smart technologies are used to execute certain behaviors¹. Today, new technologies include hyper-personalized algorithms which help collect data, for example, of peoples’ lifestyles¹⁷. AI (artificial intelligence) could be utilized when targeting the advertising of overtourism to sub-target groups.

Virtual reality (VR) could be applied when combining technology with the tourism business. Along with the technological revolution, the accessibility of devices will become more probable. This is an opportunity to have better access to devices that are necessary regarding, for example, virtual reality. If people had VR headsets, virtual reality could be utilized better. Travel agencies and transport companies could invest in virtual reality for potential customers to see destinations during different seasons. The customer could see if there is a crowd at the chosen season and could decide better whether wants to go there at that time of the year. This would influence the purchase decision. Therefore, the one purchasing a trip, as well as the overtourism destination, would benefit from this.

According to the study that aimed to determine tourists’ willingness to pay taxes and public fees to improve sustainability and experience at the destination, one out of every four tourists said to reject paying any tax and/or public fee set by the tourism activity⁵. The least willing ones for payments were either retired or younger individuals with low incomes. Using this study as the base, the people with better incomes could be primarily targeted when advertising overtourism, and for example, a donation campaign could be organized. The campaign could inform the destinations which have suffered from overtourism the most. It could encourage tourists that are planning to travel to one of those destinations to donate money to the destination for resourcing the infrastructure there. Instructions for how to donate would be provided in the campaign.

Green advertising is a valid aspect to utilize. The information given is from the study “Green Advertising on Social Media: Brand Authenticity Mediates the Effect of Different Appeals on Purchase Intent and Digital Engagement”¹⁴. Green advertising is defined as an ad that addresses the relationship between a product/service and the biophysical environment, promotes a green lifestyle, or presents a corporate image of environmental responsibility. It can include ads that promote a sustainable lifestyle with or without highlighting products or services. Green advertising share opinions, some agree, and some perceive it as misleading advertising. Nowadays, there are many with “climate anxiety” – guilt about their lifestyles because of its effect on the ecosystem and future generations. There can be indirect risks experienced due to social pressures or even accepted social norms of environmental sustainability behavior. This could be the key factor in changing a certain behavior. Social norms theory (SNT) is usually applied in this. Perkins and Berkowitz (1986) define the theory as the situation of an individual making decisions based on socially acceptable behaviors or beliefs. As a cause-and-effect relationship, brands utilize this social norm by making their products eco-friendly.

What about our buying behavior? According to Crompton (1979), the tourist industry should pay greater attention to socio-psychological motives rather than cultural motives when developing product and promotion strategies⁴. Also, the facilities of the destination do not matter that much in the destination decision⁴. It is more about the push factors than the pull factors regarding the decision. This is a good sign from an overtourism perspective. If an individual wants to relax and it is the primary motive behind the destination decision, it is not concerning only one or two destinations in the world. Cooperation with influencers could be applied here.

Social media influencers (SMI) are part of today’s marketing. There is the study that identifies consumer motivations to follow SMIs on Instagram and its association with consumer behaviour outcomes⁹. The results were authenticity, consumerism, creative inspiration, and envy. Influencers are more likely to be followed if they are genuine, open, and relatable. Social media influencers could for example say in their travel vlogs that they chose another destination over the other suffering from overtourism, if this is the case. Those following them would start to think about their destination decisions from a different perspective. Influencers could also do live-streaming videos of the overtourism destinations, with the message of the negative impacts. One study examined the tourism live-streaming viewers’ immediate purchase decisions¹⁰. According to the results, informativity, entertainment, and interactivity positively influenced immersion and, in turn, viewers’ interest in tourism products and live streaming and therefore, buying desire. In this case, the study would be used with the opposite goal of not buying the trip to overtourism destination, by influencing buying desire.

It is predicted that advertising using traditional media will become the dominant form of advertising⁸. This could be the solution for consumers not taking the advertising of overtourism offensively due to the advertising would be targeted, for example, to all watching a TV. Newspapers and different documents have been used already in this matter of overtourism. Why has this not influenced consumers? Is prioritizing self-oriented needs and motives just humane and therefore hard to resist? Maybe. It might be that there is not even a direct solution for preventing overtourism through advertising.

When the aim of advertising is to prevent overtourism, affecting customers’ emotions could be the main goal. Showing all the negative impacts it has caused from an environmental and social point of view. Tourist destinations could do green advertising – social responsibility and norms as the base for it. Of course, by not being aggressive and using strategy, the consumer would not identify directly the social values and beliefs used behind the advertising affecting consumer behavior. The Theory of Reasoned Action (TRA) could be applied here. TRA is about understanding the relationships between attitudes, intentions, and behaviors. Normative beliefs in TRA could be that others are considered to evaluate how sustainable you are. Therefore, motivation to comply would be sustainable behavior.

There is always an issue existing when advertising the negative impacts of overtourism in a certain destination. If people would not want to go to the destination anymore due to the feeling that they are not welcome there, would there be total tourist loss? This would have a negative impact on the destination from an economic point of view. What is the Golden mean?